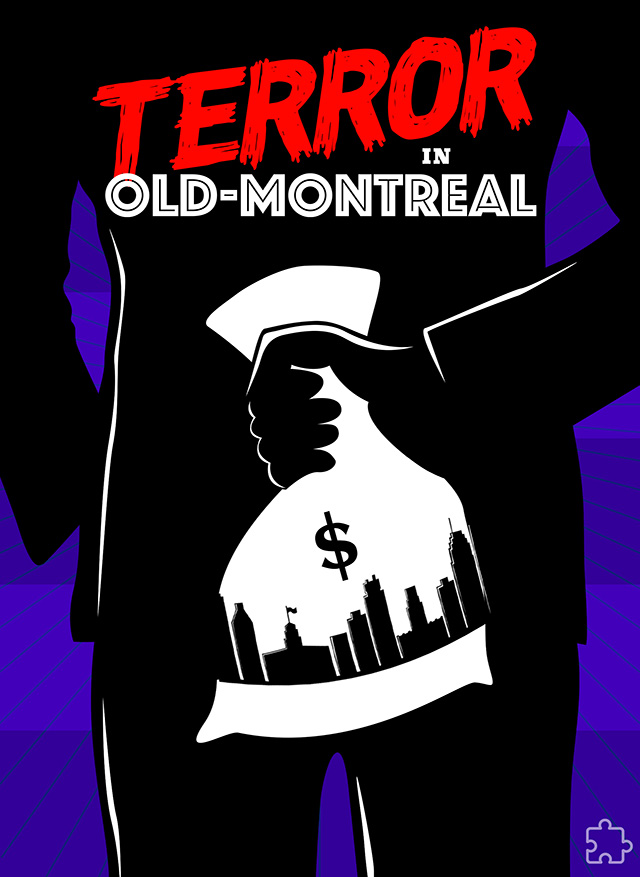 With this one of a kind investigation you will discover the old city and its secrets. Pay close attention to your surroundings and discover the city in its true glory.

👉 After purchase you will still be able to add players and you can play when you want.
✅ Valid within the next 12 months.

A mystery terrorizes the old city. Three weeks ago, in front of the Old Port's former fire station, city official Daniel Gaussette was found knocked out, tied up, and with a small fur pouch. In it, was an ancient gold coin and a note that read: "Rotten foundations, a city where theft and lies reigned, it is time to restore the truth". No further explanation. Since then, the mayor and the police have been on their guard.

You are a journalist for the "Montreal Star". You've been sent to investigate this crime. Take your notebook and your smartphone and figure out who's behind such terrible act. Your colleagues from the Star will help you with this investigation.

It's very simple. Upon purchase of any of our games, you can play when you want within the next 12 months. When you are ready to play, go to the starting point and launch your game with the link in the activation email. Then wait for the email instructions and the rest is a surprise.

2) Do I need to install a mobile app to play our games?

No, there is no app to install. We send each player an activation email that will instruct you on how to launch a game.

3) How many players can play together in the same game?

The more the merrier! Here are our recommendations: Play up to a maximum of 8 people simultaneously. For groups larger than 8, you could break into smaller groups with departures every 10-15 minutes. Raise the stakes and play against each other against the clock :D

4) Can we play without a cell phone?

No, your cell phone will be your best ally in answering puzzles. It will also be necessary to answer the riddles through our web application, check your e-mails, access the Internet or even answer a call...

5) Do we need to reserve a time to play?

No, this is one of our advantages. You don't need to book a time to play. After purchasing a game, you will have 12 months to launch your adventure whenever you want. You can play any day of the week and at any time of the day. However, we recommend playing before nightfall as some puzzles require you to read signs and observe the facades of buildings...